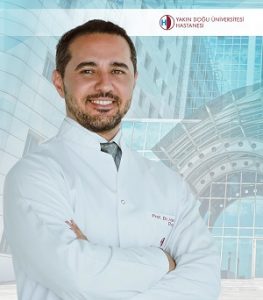 Excessive salt consumption, excessive alcohol and stressful life are among the most important causes of hypertension. Stating that 26 percent of the adult population in the world has hypertension, Near East University Hospital Cardiology Department Head Prof. Dr. Hamza Duygu states that this rate will reach 29 percent in 2025.

High blood pressure, or hypertension as it is called in medicine, is an abnormally high-pressure condition that the blood in the arteries exerts on the vessel wall. The risk of hypertension increases especially in people who have high blood pressure in their first-degree relatives, who are overweight, have a physically sedentary lifestyle, consume too much salt, drink excessive alcohol, have a stressful lifestyle, and patients with diabetes or kidney disease. Prof. Dr. Hamza Duygu said, “Hypertension is the leading cause of preventable death worldwide. Hypertension can lead to stroke, vision loss, heart attack, heart failure, kidney failure and arteriosclerosis in all other arteries. The study conducted by the Ministry of Health of the Republic of Turkey revealed that hypertension is the cause of one out of every four deaths in Turkey.

Diagnosis of hypertension
Hypertension is defined as systolic blood pressure greater than 140 mmHg (14 cmHg) and/or diastolic blood pressure above 90 mmHg (9 cmHg). Do not drink cigarettes, tea or coffee half an hour before the blood pressure measurement, take the measurement after resting for five to ten minutes in a quiet room, use a blood pressure device of appropriate width and length (in standard conditions, to wrap at least 80 percent of the arm circumference, 35 cm long and 12-13 cm wide). Make sure that there is 1-2 minutes between two measurements, the first measurements are taken from both arms (whichever is higher is accepted), and in the elderly and diabetic patients, blood pressure should be measured while sitting and standing. In addition, it is important to measure at least twice for an accurate diagnosis.”

Treatment methods
Treatment of high blood pressure is divided into two main groups: lifestyle changes and drug therapy. Lifestyle needs to be changed to prevent hypertension. It is important not to smoke, to maintain an ideal weight, to avoid physical exercise, excessive consumption of alcohol and salt, and to consume foods rich in fruits and vegetables, but low in red meat and saturated fats.

Prof. Dr. Hamza Duygu also added: “Excessive salt consumption, which is one of the most important factors to be emphasized here, is an important factor that increases blood pressure and is the cause of hypertension in three of every ten adults. In a study conducted by the Turkish Hypertension and Kidney Diseases Association in 2008, it was determined that daily salt consumption in Turkey is higher than in other countries. While the recommended average daily salt amount is about 6 grams, the average daily salt intake in Turkey is 18 grams per person. To give an example, if salt intake were halved, approximately 2.5 million lives could be saved worldwide from stroke and heart attack in one year.”