Nasal Polyp (Adenoid) can trigger many health problems in children 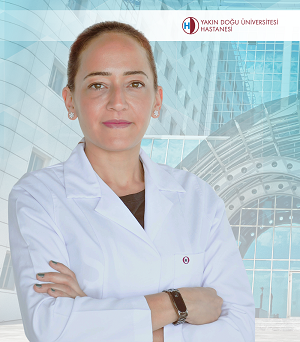 Stating that adenoids started to be seen when children leave their home environment and enter social environments such as nurseries and schools, Near East University Hospital Department of Otorhinolaryngology and Head and Neck Surgery Specialist Dr. Eda Tuna Yalçınozan said that this problem can be solved with a simple surgical operation.

Saying that adenoid disease, which is called adenoid hypertrophy in medical language, is one of the childhood diseases, Near East University Hospital Otorhinolaryngology and Neck Surgery Department Specialist Assist. Prof. Dr. Eda Tuna Yalçınozan stated that adenoid tissue is a lymphoid tissue mass located in the posterior – upper wall of the nasal passage and this tissue has an important role in the development of immune system memory. “Adenoid is present in every child at birth, but since it has never encountered any pathogens before, it is small and does not cause any problems.”, said Assist. Prof. Dr. Eda Tuna Yalçınozan and added that as a result of antigenic stimulation, it reached its maximum size between the ages of 3 and 6 and then began to regress, and that the regression was completed until the age of 15-16.

Assist. Prof. Dr. Eda Tuna Yalçınozan; “When children leave the house and enter the social environment, they encounter problems caused by the nasal polyp.”
Stating that the nasal polyp problem usually starts to show symptoms when children leave the home environment and enter social environments such as nurseries, Assist. Prof. Dr. Eda Tuna Yalçınozan stated that the upper respiratory tract is constantly in contact with microorganisms during breathing and the frequency of adenoid growth increases during the nursery period, especially as a result of the children going to the kindergarten constantly infecting each other. Assist. Prof. Dr. Eda Tuna Yalçınozan continued as follows: “These lymphoid formations can grow and become hypertrophic due to reasons such as exposure to repeated contact of microorganisms, allergies and smoking by the parents. Adenoid is a health problem that has an impact on the growth and development of children. These problems due to nasal polyp in children, nasal congestion and related mouth breathing, upper respiratory tract resistance syndrome, snoring, obstructive sleep apnea, distraction and the related decrease in course success, restlessness and irritability, pee incontinence while sleeping at night, swallowing and speech disorders, decreased taste and smell, sinusitis, fluid accumulation in the middle ear, hearing problems, bad odor in the breath, tonsillitis, pharyngitis, vocal cord inflammation, pneumonia, abnormal facial and tooth development, growth and development retardation, pulmonary hypertension, cor pulmonale, can cause many health problems. For these reasons, families should be on the alert, especially in children who have frequent infections and have problems such as constant nasal congestion, snoring, and sleeping mouth open. Considering the possibility that the nasal polyp problem may also occur in their children, they should consult an otolaryngologist.”

Children are discharged on the day of operation
Stating that endoscopic examination methods are applied more easily today, Assist. Prof. Dr. Eda Tuna Yalçınozan said that thanks to these examination methods, the diagnosis can be made correctly, however, in cases where the symptoms and findings do not comply, radiological examinations are also required. Assist. Prof. Dr. Eda Tuna Yalçınozan continued as follows; “Sometimes adenoid tissue can grow due to infection and this infection may continue for weeks. This condition is called adenoid inflammation. Continuous nasal congestion or runny nose, nasal discharge, sore throat, headache, ear pain and ear infections can also cause complaints such as cough. Treatment of adenoid infections is the first step of antibiotherapy and other auxiliary drugs; However, if the child starts to experience infections such as sinusitis or otitis very often, medical treatment will no longer work and breathing problems will continue. In such cases, the adenoid tissue should be removed. This procedure is called adenoidectomy (adenoid removal) surgery. Adenoidectomy surgery can be performed at any age with a correct diagnosis that fits the indications. Surgery is a procedure performed by a specialist in Otorhinolaryngology, under general anesthesia in hospitals or surgical centers. In fact, as long as no unexpected complications develop after the surgery, patients can be discharged during the day. After a post-operative period of approximately 4-6 hours, patients can start eating many things, provided that they are not solid and hot, and continue their normal lives the day after the operation.