Suspected while taking selfie, a tumor diagnosed in her brain! 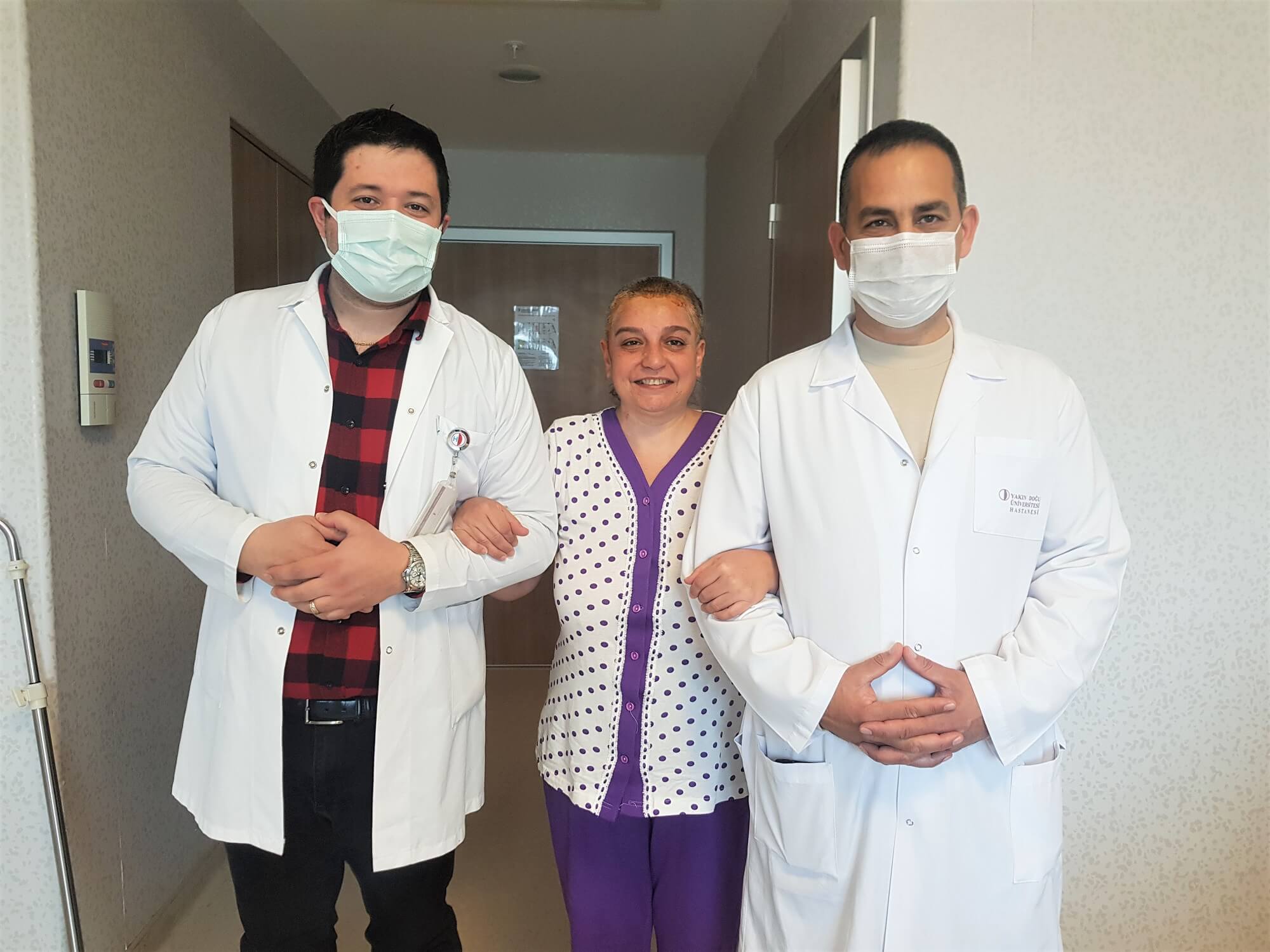 Ajda Şengönüller Gürkanlar, who experienced a personality change due to a brain tumor, recovered at the Near East University Hospital.

Emotion and behavioral changes, which are mostly explained by psychological reasons, may also be caused by unexpected physical effects. It was revealed that the changes in emotions and behaviors experienced by Ajda Şengönüller Gürkanlar, a 53-year-old mother of 2 children, who were referred to the Near East University Hospital after the seizure she experienced after her recent emotional and behavioral changes, were found to be caused by the tumor in her brain.

Tumor located on the skull base, next to the optic nerves and pituitary gland, was removed in an 8-hour operation carried out by a team led by Assoc. Prof. Doğa Gürkanlar. Ajda Şengönüller Gürkanlar, who had a high risk of vision loss and coma due to the operation, was discharged without any loss of function.

Assoc. Prof. Dr. Doğa Gürkanlar: "The pressure of the tumor on different parts of the brain can cause changes in emotion and behavior in the patient"
Reminding that the brain manages the vital functions of the body as well as the senses, emotions and memory of the person, Assoc. Prof. Dr. Doğa Gürkanlar said, “Tumors in the brain can cause physical abnormalities depending on where they are located, as well as emotional and behavioral changes due to their pressure on the brain.”

Saying that she normally has an emotional temperament, Ajda Şengönüller Gürkanlar stated that after the days when she felt energetic, there was a noticeable increase in her emotional intensity realized even by her relatives: “I felt like I was experiencing depression and unhappiness. I quickly became offended by everything. I was tired of the maturity that came with advancing age. Then my headaches started. " Şengönüller Gürkanlar, who connected her change to the lack of sleep and eating patterns, continued to live in this way, unaware of the presence of a tumor in her brain until she arrived at the Near East University Hospital.

Ajda Şengönüller Gürkanlar: “The camera was showing her while she was taking selfies. The moment I realized I was pulling the windshield of the car, I was frozen"
Ajda Şengönüller Gürkanlar describes the process of coming to the hospital as follows; “We went out with the kids one weekend. We stopped by the roadside. In the car I said to the kids, let's take selfies. It was then that I realized that I started doing things I didn't like at all. The camera was pointing in front of me while taking the selfie. However, as soon as I realized I was taking the photo of the windshield of the car, I was frozen. Then we continued by car. I was driving the car. There was a police check on the road. While my daughter was talking to the police, I pressed the gas pedal 2 times involuntarily. My son was able to stop the car by pulling the handbrake. My children said that at that moment I was still as if frozen. When I felt weakness, my daughter got behind the wheel. We went to the hospital immediately. I had a big seizure there. Later, they sent me to the Near East University Hospital."

She regained her health with the surgery performed by microsurgical method
Ajda Şengönüller Gürkanlar, who was taken into intensive care at the Near East University Hospital, was diagnosed with a brain tumor as a result of the tests performed. Afterwards, the decision for surgery was made. The patient, who was operated with the microsurgery method by a team led by the Head of Brain and Nerve Surgery Department Assoc. Prof. Dr. Doğa Gürkanlar, was discharged healthily after 2 days of intensive care and 1 week of inpatient follow-up.

The patient, who was operated for about 8 hours and postoperative pathology results came out clean, described how she felt when she learned that her treatment was surgery; “When I was told that I needed surgery for post-diagnosis treatment, it was difficult for me to accept. My family and my doctors were able to convince me after long efforts. If I refused to admit it, I might not be alive right now. I fought and fought for my family. I won this war thanks to my doctors. I came here in a very sad and bad state, but today I am happily discharged."

Assoc. Prof. Dr. Doğa Gürkanlar: "The slightest mistake to be made during the operation could cause vision loss, hormone disorders and even vegetative survival in the patient"
Stating that the tumor with a size of 3.5cmx4cm located in a risky area in the skull base of the patient, Assoc. Prof. Dr. Doğa Gürkanlar said, “The slightest mistake during the removal of the tumor located next to the optic nerves and pituitary gland could cause vision loss and hormone disorders in the patient. We discharged our patient in good health thanks to the experience we have and the technological facilities of our hospital."

I was born again ...
Stating that she was reborn at the Near East University Hospital with the surgery she had, Ajda Şengönüller Gürkanlar said, "I would like to thank all the doctors, nurses and the staff working in all units of the Near East University Hospital. It is a great chance that we have such a hospital and doctors in Cyprus. It is such a comfortable and reassuring environment that when I was told that I could be discharged, I wanted to stay for a while. In this life, I have more things to do and ideals. Even though I am a little tired, I feel good and I am very happy.”