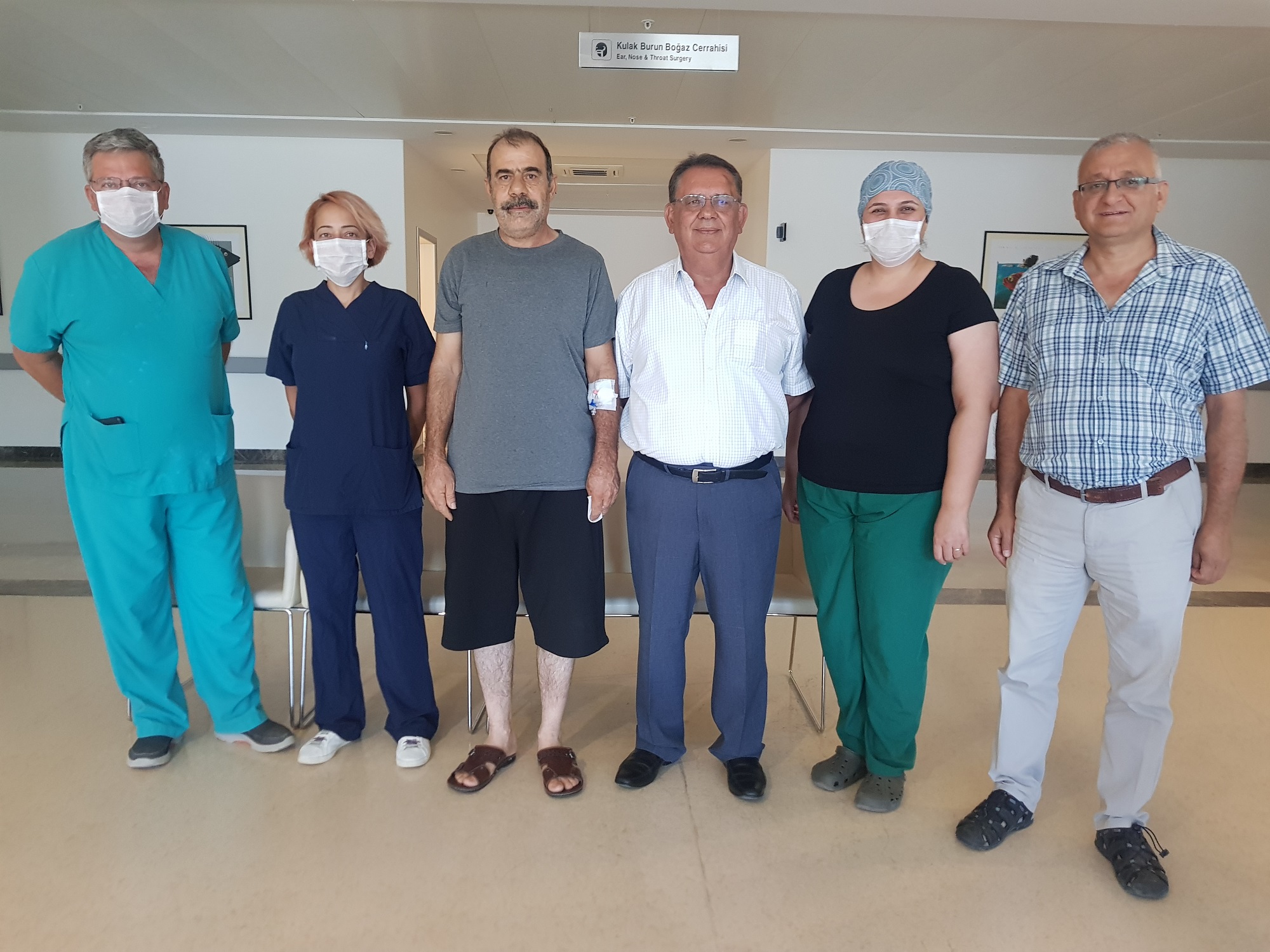 Upon the application of Derviş Niğen to Near East University Hospital Otorhinolaryngology Head and Neck Surgery with a complaint of swelling in the upper palate, and as the biopsy examinations revealed that the patient was suffering from a tumor, a three dimensional model of the patient's skull was created with the help of the tomography images by the NEU 3D Laboratory. The operation to remove the tumor was planned on the model by the Head of the Department of Otorhinolaryngology Head and Neck Surgery, Prof. Dr. Ferhat Erişir and his team The palate prosthesis exclusively made by the Hospital of Faculty of Dentistry of Near East University placed in the upper jaw bone which was removed with the teeth at the operation carried out at the Near East University Hospital of Faculty Of Dentistry. Such an operation is the first in our country.

Prof. Dr. Ferhat Erişir: "Half of the patient's upper jawbone and teeth were removed and the tumor tissue in the sinus was removed"
Head of the Department of Otorhinolaryngology Head and Neck Surgery, Near East University Hospital, Prof. Dr. Ferhat Erişir stated that, when the biopsy result of the patient who applied to the hospital with the complaint of swelling in the upper palate came out as cancerous tissue, they planned the necessary operation with the support of NEU 3D Laboratory and Near East University Faculty of Dentistry Hospital. Stating that tumors that fill the sinus and sometimes extend to the eye can be encountered, although not very often, and these are described as late cases, Prof. Dr. Ferhat Erişir pointed out that it is an advantage for the patient to notice the swelling in the mouth and apply to the hospital without wasting time.

Prof. Dr. Ferhat Erişir: "In the operation performed, with the incision applied beneath the eye of the patient, the nose was opened by going down the edge of the nose and the lip was opened by dividing it in half, the upper jaw bone and half of the teeth were completely removed, the sinus was entered and the tumor was cleaned."

After the operation, Prof. Dr. Ferhat Erişir stated that Derviş Yeğen made great progress within a short time, did not have trouble in eating and speaking, and did not feel any pain related to the operation. The patient was referred to the Radiotherapy and Oncology Departments for postoperative follow-up and treatment.

Assoc. Dr. Emil Mammadov: "Using tomography images, a 3D model of the patient's skull was made for the operation."
Head of Pediatric Surgery Department and NEU 3D Laboratory Supervisor Assoc. Prof. Dr. Emil Mammadov stated that the Near East University 3D printer laboratory has been providing patient-specific implant production and 3D models design for 5 years. Assoc. Prof. Dr. Emil Mammadov: “For this case, at the request of the department of ENT, we extracted the 3-dimensional model of the necessary part of the skull from the patient's tomography images and tried to assist in the planning of our surgery branch.”

Noting that one of the main uses of 3D printers recently is preoperative planning, Assoc. Prof. Dr. Emil Mammadov stated that 3D models of patients can be made using 3D printers using MR, tomography or ultrasound images, even ultrasound images of the baby in the mother's womb. Assoc. Prof. Dr. Mammadov said that using 3D models in preoperative planning shortens operation times by 25-30%.

Prof. Dr. Oğuz Ozan: "Chewing and comfortable speaking functions that our patient lost has been regained"
Near East University Faculty of Dentistry Hospital Prosthodontics Specialist Prof. Dr. Oğuz Ozan stated that the patient, who lost half of his teeth in the operation performed on the upper jaw due to cancer, was planned to be replaced a prosthesis in the same operation and the borders of the prosthesis were determined by the measurement taken before the procedure.

Prof. Dr. Oğuz Ozan: "Following the removal of the tumor tissue, the existing deficiencies were restored with the jaw face prosthesis exclusively designed and produced for our patient to eat and talk comfortably, and our patient regained the lost chewing and comfortable speech functions." Prof. Dr. Ozan Oğuz continued stating that the patient's rehabilitation process through this process can be done only in few centers in Turkey and Cyprus.