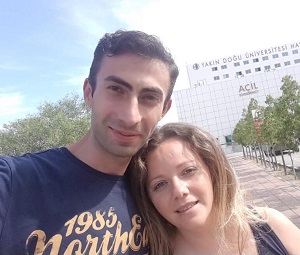 I got this disease on our 5th wedding anniversary in Cyprus. Life and the things you face are so different and unexpected that you cannot calculate or control where you will end up. After swimming and sunbathing and playing tennis one day, you can find yourself fighting against a serious disease the next. Your age, gender, identity, race, language, diploma and occupation are no longer important. Before my disease, I also was not aware of these values; I was very surprised. I didn't expect it. I was lost in the flow of life.

I woke up one morning in the hotel and my left hand was bruised. I stood up and felt very dizzy. I had never felt this dizzy before and whereas normally I would lay back down for my dizziness to pass, this time I did not; I found that this dizziness could not be cured by sleeping. I told my husband and we tried to figure out what was happening; if I had slept on my hand or if the blood flow was restricted. No one in our family had ever had an operation or a disease before. We went to the hotel doctor to see if he could help. The doctor said that it could be important and asked me if I was allergic to anything or if I had painted my bruised hand. The doctor told us to go to the closest hospital. There was 45 minutes between the hotel and the closest hospital. We went there. At that instance, I wished I was in Istanbul; however, when writing these words today, I am glad that I was in Cyprus.

Near East University Hospital is a hospital where you can comfortably leave your loved ones in confidence. At first, I could walk, but when we arrived at the closest hospital, I couldn't walk and my left eye had rolled back. I turned to my husband and told him that my left eye had rolled back and my husband said that’s when he understood that something was seriously wrong. The whole room was spinning and I was afraid that I might have to live with this for the rest of my life. I could not look around at my surroundings. I remember closing into myself and thinking that I was in great trouble. After undergoing a brain tomography, I was referred to Near East University Hospital. I really was in trouble and couldn't understand why. The paramedics in the ambulance told me that I was going to a very good hospital and told me not to worry. My husband was not allowed in the ambulance and this was quite scary for me, however we had to remain strong. I told them to tell my husband where we were going and gave them his number so that he could follow.

When we arrived at the hospital, Dr. Bahar from the Neurology Department was there to greet us. The necessary tests were conducted, then I was first taken into intensive care, then into the operation theatre for a few hours. When in intensive care, there were many people, nurses and doctors surrounding me and everyone was working to help me get better. I had to do all I could. I had to recover quickly as possible. A blood clot was found in the main blood vessels that supply blood to the brain and hands. I had to have an angiography to reach the blood clot and clear my blood veins. When the Interventional Radiology specialist Dr. Süha was taking me for my angiography, I remember seeing my husband and Dr. Bahar at the entrance. Apparently, I asked my husband if he had thought about everything, and he told me that I was going to be fine. I entered the angiography in good spirits. I found it difficult changing beds in the angiography room. An anaesthetic specialist called Mateo spoke with me and told me that I was going to be fine. I told him that I have lenses in my eyes, so they removed them. Apparently, I then lost my speech and I remember saying that I do not usually speak like this. Dr. Özlem and Dr. Ali from the Cardiovascular Surgery Department looked at my arm blood vessels and took me in for an operation to clean the clots in my arm arteries after the angiography. The operation went very well. I do not remember exiting the operation theatre. When I opened my eyes, I was in the intensive care unit; there were beeping devices, people were showing me lots of attention and I was asking everyone who passed by what had happened to me. I could see my husband for 5 minutes a day and I remained in intensive care for 2 whole days. When I woke up, my throat was sore and I had a headache. It felt like this pain lasted for 2 days. Intensive care was very boring. It is a place far from your loved ones, with no communication; no one would want to stay there for long. I received the news that I was going to be taken to the inpatient ward in the morning, however they also told me not to raise my hopes too high, just in case I was not taken there. I left intensive care on the 5th of October. The 5th of October was the wedding anniversary of one of the nurses who worked on the intensive care unit. In the evening, I said happy wedding anniversary to both of us and the nurse laughed.

Dr. Bahar and the other heroes visited me every day. Dr. Bahar says she is just doing her job, but I already know that she does much more than her job. I also know that I even owe them for each breath I take. Cyprus and Near East University Hospital is now very meaningful for me. I was filled with joy when I went to my room on the inpatient ward. It was as if there was a very long stairway in front of me and I was slowly climbing the stairs. I had the doctor and nurse next to me and my loved ones behind me spurring me on. I had got used to the Cypriot workers in the East Wing of the 5th Floor to the extent that cried when I left the hospital; if they had asked me to stay, I would have done because we had become like family. I have so many memories there that they would not fit onto these pages...